I've been trying for the last three days to finish telling the story about my appearance on Tuesday before Master Cooper, but along the way I've gotten sidetracked with my Venn Diagram. It seems there were so many proceedings going on at the same time, withs briefs flying here and affidavits flying there, that no one could quite get it straight which was which. That's when I said maybe we needed a Venn Diagram. Which I posted yesterday.

After looking it over, I realized I had left out a few proceedings (six actually). So I redid my diagram, and now it looks like this: 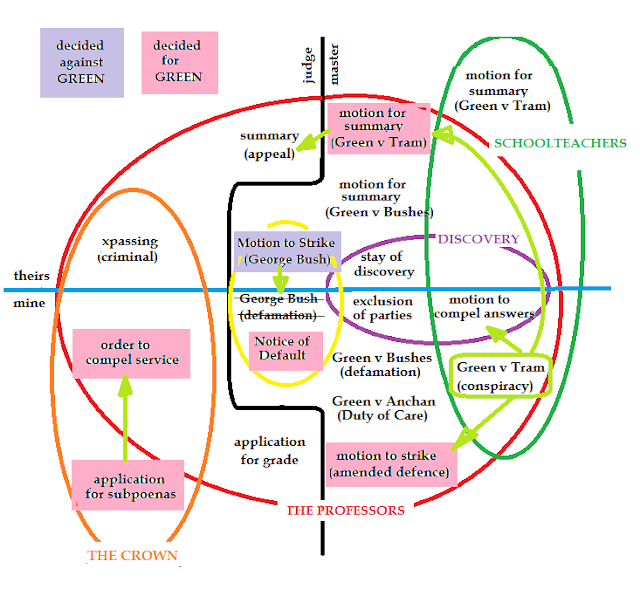 It all started with my original lawsuit, Green v Tram et al, where I sued for getting kicked out of the practicum. You can see three arrows pointing outwards...let's follow them first. (There should be more arrows but I didn't have room.) The first one goes down and left to my "Motion to Strike". That was actually something they tried to slip past me early in the proceedings...an amendment to their Statement of Defence which they put in without my consent. I took it before the Master, who slapped them down by ordering $500 costs in my favor. (The amendment stood, but that didn't hurt me.) That was my first "win". Meanwhile, I also made my first motion with respect to my discovery rights...my motion for exclusion of co-defendants from each others' examination. It's grouped inside the purple with three other motions relating to my discovery rights. This one is outside the green circle because the Schoolteachers chose not to oppose it.

Then there's the long curved arrow point to the Professor's Motion for Summary. I won that motion in June when Master Berthaudin ruled in my favor. They're appealing that motion to the Queen's Bench, where it will be heard before a judge. (That's why it's to the left of the black line.)

If we look in the yellow circle, you'll see three actions relating to Green v Bush. That was the action for defamation I commenced in response to things Professor Bush said about me in class in front of the other students. The University was a bit slow in responding to my Statement of Claim, and I took advantage of their tardiness by filing a Notice of Default. I admit that was a bit of a dirty move, but they still had to pay me a $300 settlement for consent to lift the Notice. And anyhow, I thought they needed a bit of a wake-up call. In the end it didn't help me much...they subsequently filed a Motion to Strike (that means they didn't even file a Statement of Defense.) Initially that didn't scare me, but on researching the law of slander (as opposed to libel, or written defamation) I became aware of some weaknesses in my case. So to cut my losses, I discontinued my action, and paid them a settlement of $1000 for their troubles. That was their first and only entry in the "win" column.

The next action I launched was another claim for defamation, Green v George and Heather Bush. That's the one for them accusing me of trying to break into their home, which came from them slamming the door on me when I tried to serve them with the previous lawsuit. They filed a defense (this one was on time!) and then filed a Motion for Summary Judgement. That one's working its way through the system, with briefs and affidavits and the whole nine yards. Ironically, if Professor Bush had just come to the door and accepted service of the other motion (the one I eventually dropped!) he and his wife wouldn't have to be defending this newer motion, which promises to be much more problematic for them. But hey...at least they got $1000 bucks out of me.

That just about takes care of everything to the right of the black line, except for one more that I still haven't told you about: Green v Anchan et al. That's actually the sleeper here...to paraphrase a former Middle East dictator, it's the "mother of all motions". I only just filed it at the end of August. Maybe you remember how I told you I was frustrating the University because I sued them for kicking me out of the practicum, instead of suing them for kicking me out of the education program. Well, now the other shoe has dropped. I'll tell you more about it later. If the University wanted me to sue them for the Non-Academic Misconduct...well, they've got what they wished for. We'll see how that works out for them. But for now, lets look at the left-hand side of the leger.

I already mentioned the Professor's appeal of their defeat on Summary Judgement, which goes before a judge instead of a master. Then there is my Application for a Grade (Applications are heard before a Queen's Bench Justice, not a Master) where I'm asking the court to compel Professor Metz to mark my assignment, which he claims I never completed. That should be interesting.

And then we get into the criminal cases. My trial for Trespassing, Mischief and Forcible Entry began on September 3rd and was adjourned, after a full day of testimony, til the 25th. But leading up to that trial, I had two Applications before Provincial Court. First, I applied for leave to call witnesses to the "home invasion" of January 11th, even thought I wasn't on trial for it. My application was granted by Judge Guy. Although the Crown didn't exactly oppose it, I still count it in the victory column because I was initially refused by the clerks at the Provincial Court Desk, so I had to prepare about 100 pages of evidence anhd arguments to make my case. And strategically, it was a huge setback for the University.

Then there was a subsequent motion before the same Judge to compel Mr. Meronek to accept service of my subpoenas, which he initially refused to do...I can't imagine why. As far as I could see, he was heading for a Contempt of Court citation if he stuck to his guns...fortunately, at the last minute his young associate Lindsay Mulholland brokered a deal whereby they accepted service. I count that as another win. So the score is standing at Green 5 - U of W 1.

So what else is there? Well, after I put all this together, I realized that there were still three motions that got argued before a judge and decided...two of them in my favor, and one against. But I just don't have any room left on my Venn Diagram. What were these motions?

Well, there were to Applications for Protective Orders by Professors Metz and Bush, where they went before a judge in my absence to try and get me declared a danger to their personal safety. The judge wasn't buying it. So that's two more win's in my column.

But having flexed their muscle and shown they could have me locked up, they were now in an awkward position of having to get me convicted of a criminal offense in order to justify having locked me up. Which is where we are right now. And it may be only my opinion, but I don't think it's working out that well for them.

When we come back, I'm finally going to tell you how our session before Master Cooper wrapped up.