A Day In the Faculty of Education

It seems I made a new friend yesterday, who calls herself "Anonymous". She was a classmate of mine who has apparently been following this blog for quite some time, but wasn't moved to post any feedback until a couple of days ago. One thing led to another, and we got into quite a discussion over various things, in the course of which she recalled a group project we had worked on together. It got me thinking, so I thought I'd write about it. And I'm wondering if Anonymous remembers it the same way as I do.

It was maybe the second week of classes, and Professor Bush was teaching "Philosphy of Science Teaching". He began by asking, "what do you think of when you think of science?". He talked about the three pillars of science as being: experiment, hypothesis, and data. Or something like that...I don't remember exactly. But that's not the point. What he wanted us to do was to break into small groups and create "concept charts"...those are those balloon-maps with all different ideas, showing linkages between closely-related concepts. Professor Bush's concept map for "what is science" started off looking something like this:

And from there it would branch off into who knows what...that was up to us. He explained that we should think of it as though inside our brain, we had little groups of neurons representing these concepts, and as we learned more about science, more bundles of neurons got linked together, and that's what the map represented in a conceptual way. I may be paraphrasing here, but I think that was the drift of it. It sounded like fun.

You have to understand that we were immediately broken up into small groups, provided with boxes of colored markers,  and given about ten minutes to fill up a big sheet of flip-chart paper. I was in a group of three...myself, my friend Anonymous, and a guy I'll call "Moonface" (no disrepect intended). I wrote yesterday that I recalled him as one of the most capable and intelligent of my classmates, but very much a "team player"...which is to say, someone who follows the lead of the established heirarchy. Moonface immediately took charge and laid out the framework of "experiment, hypothesis and data".  We just had to fill in more concepts.

I told the group I didn't think that the idea of the project was to follow Professor Bush's outline. That's what science looked like inside his brain. The idea was that we were supposed to consider what science looked like inside our brains. Then when we compared our results to everyone elses, it would be interesting to see how different we all were.

When I was done, Moonface and Anonymous were looking at me with expressions of slack-jawed incomprehension, like I had come from another planet. After about two seconds of silence, Moonface said to Anonymous: Okay, what goes under "hypothesis"? And they got back to work. Okay, I'm exaggerating a bit, but that was the general drift. In particular, it was clear to me that for my group partners, or at least Moonface, the point of an assignment was to give the professor exactly what he wanted. And going off on in our own direction, like I wanted to do, was the mark of a troublemaker.

I didn't want to get into an argument with them, so I might have gone along. But but by now I was really pretty interested in finding out what "science" looked like inside my own brain...and conversely, I had no interest whatsoever in trying to guess what Professor Bush wanted. I was going to draw my own concept map. So I grabbed a sheet of flip-chart paper and found a spare table. What I drew started off something like this: 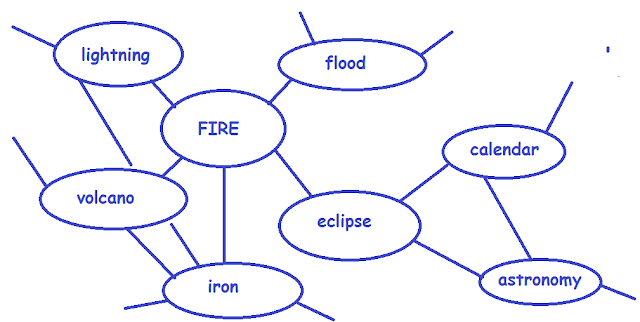 I filled it in with more an more linkages to things like metallurgy, the telescope, the theory of gravity, agriculture, geometry, etc. and all kinds of cross-linkages.  It was fun. Pretty soon the class ended and Professor Bush told us to pin up our charts all around the classroom. We would talk about them when we came back the next day.

I have to say I really thought that Moonface was wrong in thinking that Professor Bush wanted us all to regurgitate exactly his own idea of "what is science". I honestly thought we were supposed to be innovative and try to do things differently. So when we came back to class the next day, I was a little taken aback to see that all the charts were still pinned up to the classroom walls...except mine.

Then Professor Bush went around the class, commenting favorably on everyone's efforts...all of which were structured on his own three pillars: data, experiment, and hypothesis! No mention was made of my chart...well, that's not quite so. Professor Bush had marked the projects...it wasn't a mark that really counted, he explained...of the 10% of the course credit allocated to in-class participation, this assignment would be one point. So it was just a token mark to acknowledge our participation; and pretty much everyone had been given 3 out of 3. "Unless, of course, you did something obviously wrong, like only using one color of marker when you had a whole box of different colors to choose from..." That was me!

I didn't open my mouth to complain or argue. I was there to get my certificate, and I really didn't need Professor Bush or anyone else to give me their approval. But at the same time, there was something very disturbing about the uniformity of thought that was being fostered, both from the professor's side and on the part of my classmates. If this was how they were treated, and how they were expected to respond, what would happen when they became teachers? They would surely have been conditioned to believe that a good student was one who gave them exactly what they wanted to hear, and if a student tried to go his own way and do things differently, he was probably a troublemaker. Like that Marty Green, the guy they had to kick out of school...


A couple of weeks later, Professor Bush casually approached me after class with a rolled-up sheet of paper in his hand and asked if it was mine. Yes, it was my concept chart. Apparently it had gone "astray" and he had found it somewhere, and just wanted to return it to me. Since I hadn't put my name on it, he wasn't sure. I noticed that he had given me a grade of 2 out of 3.